Here are several examples of school safety improvements that can be implemented at little or no cost. 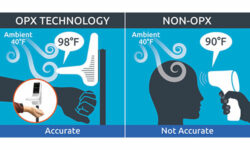 Can the Wrong Temperature Screening Device Lead to a COVID Outbreak In Your School?

As temperatures begin to drop in the U.S. this Fall, so will the accuracy of your traditional, non-contact thermometer.