In the first six months, the Safe2SayPA tip line received 4,713 tips related to suicide and self-harm compared to 607 reports of threats against schools. 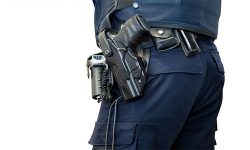 The decision was made after the Michigan school conducted a two-year feasibility study following a shooting inside a dorm room.

The state task force, made up of mental health experts and college counselors, was created by the General Assembly during the 2019 legislative session.

The North Carolina district, which consists of more than 80 schools, will use the money to replace intercom and entry systems at its elementary schools.